(ANTIMEDIA) An endless sea of money flowing into the field of military technology creates constant advancements in new and terrifying ways to die, and the Defense Advanced Research Projects Agency (DARPA) is on the front lines in that mission. DARPA’s latest defense system, HELLADS, is one step closer to arming aircraft and drones with an exceptionally powerful and destructive, weaponized laser beam.

To understand how alarming this latest technology actually is, a comparison to current laser weaponry is in order. Already in use on board the USS Ponce, the Navy’s Laser Weapon System produces a beam of light capable of destroying the electronics systems and overheating the engines of drones, small boats, and small aircraft — and can even explode warheads. And those lasers are just 30 kW. Lasers to be used with the HELLADS system are up to ten times more powerful, and even when tested at 50 kW, were able to deliver a consistently high-quality beam for up to 30 seconds at a time, and then only limited in scope by battery life.

But there’s more. Remember the goal of putting this framework in the air? Well, the same contractor that streamlined the laser has also developed the jet-powered Avenger drone which generates enough energy in flight to continually recharge that battery — giving the weapon unlimited ammunition from an agile, unmanned aircraft, capable of speeds around 450 mph, that can stay aloft for up to 18 hours at a time. But not yet.

HELLADS will first be tested on the ground against “rockets, mortars, vehicles and surrogate surface-to-air missiles,” according to a DARPA statement. “The technical hurdles were daunting, but it is extremely gratifying to have produced a new type of solid-state laser with unprecedented power and beam quality for its size,” said program manager Rick Bagnell. “The HELLADS laser is now ready to be put to the test on the range against some of the toughest tactical threats our warfighters face.” 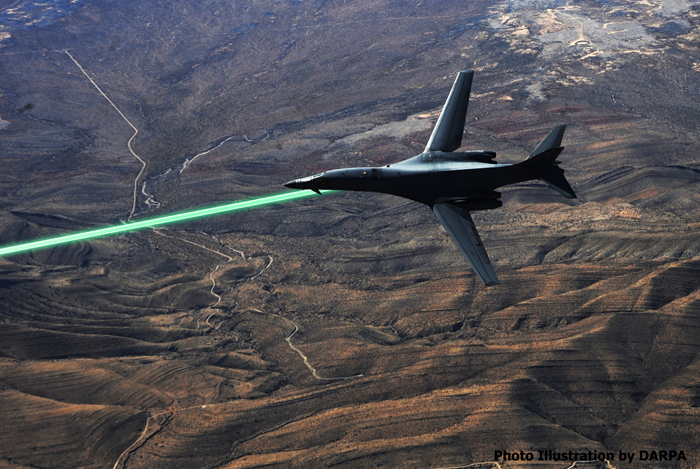 Though marketed primarily as a defense system, the statement adds, “Laser weapon systems provide additional capability for offensive missions as well—adding precise targeting with low probability of collateral damage […] Following the field-testing phase, the goal is to make the system available to the military services for further refinement, testing or transition to operational use.”

So, the question must be posed: When so many fight simply to survive, how gratifying can perfecting an obscenely destructive weapon of war really be?

This article (The Latest In Terrifying Ways To Die: DARPA’s Airborne ‘Death Ray’) is free and open source. You have permission to republish this article under a Creative Commons license with attribution to the author and TheAntiMedia.org. Tune in! The Anti-Media radio show airs Monday through Friday @ 11pm Eastern/8pm Pacific. Help us fix our typos: edits@theantimedia.org.