(NATURALSOCIETY) I recently snapped a photo from an advertising circular that was delivered to my home, proudly promoting Monsanto’s ‘probably carcinogenic’ Round Up, on sale no less, at a local hardware store. While US garden and DIY stores are still selling cancer-causing poison in a jug, a German retail giant will no longer carry glyphosate-containing products as of September 30, 2015.

More than 350 ‘Toom Baumarkt DIY’ stores belonging to the REWE Group are removing any product that contains this endocrine disrupting chemical concoction, and as of today, no such products can be re-ordered from their stores.

The company told the world about this new policy just recently in a press release (in German).

However, by the end of 2013, toom Baumarkt had begun to remove this product and approximately 60 percent of glyphosate-containing products were removed from their shelves.

Instead, Toom Baumarkt offers its customers alternative, environmentally acceptable products. As the EU determines whether or not to ban glyphosate, the store will likely see sales soar, as people around the world are becoming educated about just how problematic glyphosate can be to humans, animals and the ecosystem. 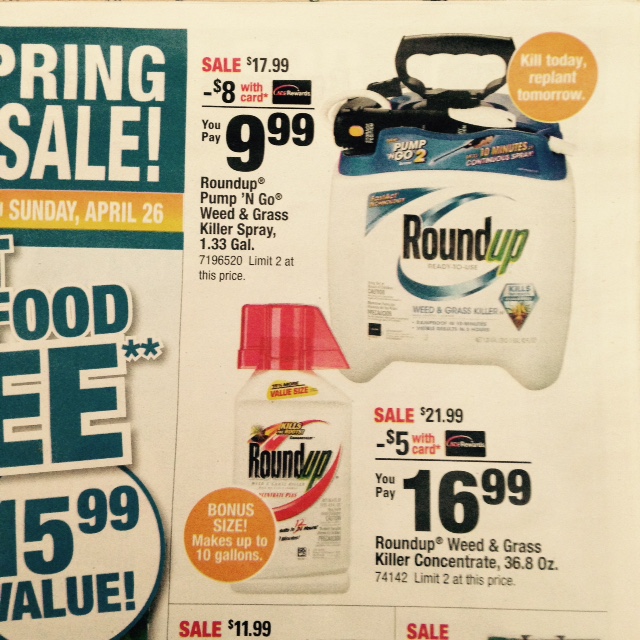 “As a responsible company, it is important to regularly review our entire range and seek to protect the environment and nature with alternative and more sustainable options. Toom Baumarkt is constantly and consistently developing a more sustainable portfolio of products.”

Customers of Toom Baumarkt DIY stores are given much more sustainable alternatives to fighting garden pests, fungus and other plant diseases, and can even speak with staff members about specific alternative plant products which are not based in harmful biotech chemical science. Further information about alternative plant protection can be found here.

Although an EU ban would send a huge message to Monsanto, the makers of Round Up, we need not wait for our governments to make these decisions. Retailers will feel the burn when there are no longer customers buying their toxic products.

Let’s hope, just as the demand for organic food increases, the boycott of these toxic chemicals is amplified also. You can help by passing along the positive actions of companies like toom Baumarkt DIY.